This Pearl Barley Cranberry Pilaf in Instant Pot is a perfect side dish recipe to make during the holidays. Make it for Thanksgiving or Christmas, and serve it with turkey or ham for a wonderful meal that everyone will love.

Barley is one of the earliest known cereals to be cultivated, and it was used mainly to make bread and beer. It is a staple in many countries around the world, especially in regions where the weather is too cold for wheat to grow.

However, the grain’s main modern use is used as a basic ingredient in malting and beer brewing.

Hulled barley is minimally processed to remove only the tough inedible outer hull. It is considered a whole grain, and it takes a long time to cook.

Pearl barley has been polished, or “pearled,” in order to remove some of the outer bran layers along with the hull. Most of the barley found in the supermarket is pearl barley.

It is a refined grain but much healthier than other refined grains because some of the bran may still be present. It also has a good amount of fiber. Pearl barley cooks faster than hulled barley.

Both types of barley are used in soups, broths, and stews. Pearl barley can be boiled and served as an alternative to rice.

It has a chewy, nutty texture, and it is absolutely delicious. The easiest way to cook pearl barley is either on the stove, the same way you would cook rice, or in the Instant Pot, as we will do today.

An Instant Pot can save valuable time and space in the kitchen during the holidays.

During the holidays, we all know that the kitchen gets really busy, and there is never enough space in the oven or stove to cook all the dishes we need/want to make.

An Instant Pot can save a lot of time and also space, as it cooks food way faster than your stove, slow cooker, or oven.

For example, in less than 30 minutes, this barley with cranberries is ready to serve.

What ingredients do you need for Pearl Barley With Cranberries in Instant Pot:

How to make Pearl Barley Cranberry Pilaf in the Instant Pot?

Step 1. Rinse the barley thoroughly to get rid of the starches and prevent sticking. The better you rinse, the less sticky the barley will be.

Step 3. Add chicken or vegetable stock. Seal the lid and make sure the steam valve is in a sealed position. Set the pot on high pressure (pressure cook ) for 20 minutes.

Step 4. Let Instant Pot naturally release for 15 minutes, then carefully turn the vent to quick release. Remove the lid, add the almonds and fluff the barley with a fork.

Serve warm as a side dish.

How to store leftovers:

I really hope you do not have leftovers because it is a super delicious side dish. However, you can store them in the refrigerator for up to three days in an airtight container. Warm it up on the stove, by adding a tablespoon of water or in the microwave.

Pearl Couscous With Almonds And Raisins

Rice Pilaf with Pork and Vegetables

Check out the web story for this recipe: Pearl Barley With Cranberry And Almonds Pilaf (Instant Pot) 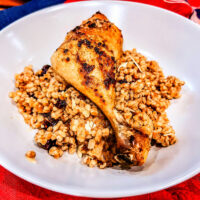 This easy recipe for Pearl Barley Cranberry Pilaf is perfect for any occasion, especially during the holidays when you can serve it as a side dish to any roasted meats. Made in the Instant Pot.
5 from 1 vote
Print Pin Share GrowSaved! Rate
Course: Side dishes
Cuisine: American
Keyword: barley, barley pilaf, Thanksgiving side dish
Prep Time: 10 minutes
Cook Time: 20 minutes
Natural release for Instant Pot: 15 minutes
Total Time: 45 minutes
Servings: 6 servings
Calories: 211kcal
Author: The Bossy Kitchen

Prevent your screen from going dark