Hungarian Goulash is a traditional beef soup or stew that originated in Hungary in the 9th century. It is a hearty and flavorful dish that features tender chunks of beef or pork, onions, Hungarian paprika, tomatoes, and sweet peppers.

This recipe will give you instructions on cooking this dish in 3 ways: on the stove, in a crockpot, and in an Instant Pot. You will discover how easy it is to make this recipe using classic or modern methods.

Very popular in Hungary and other parts of Eastern Europe, this dish can be served with bread, pasta, spaetzle, boiled or roasted potatoes, carrots, and pickles.

Goulash is typically cooked in a large pot over an open flame and can be served with potatoes or dumplings.

Hungarian beef goulash has a rich, hearty flavor and is considered a national dish of Hungary.

The name “goulash” comes from the Hungarian “gulyás,” which means “herdsman.” The dish was traditionally made by herdsmen, or “gulyás,” who would cook the stew over an open fire while out on the range.

One of these awesome recipes that require slow cooking, this dish can be made on either stove, crockpot, or Instant Pot, depending on the time you have to spend in the kitchen.

This Hungarian Goulash is a hearty dish that works best for chilly days. It feeds a crowd. It is nutritious and very easy to make.

Also a comforting meal, this dish makes the perfect dinner for your family. Contrary to popular belief here in the U.S., Hungarian goulash is NOT made with ground beef or macaroni noodles!

That is called American goulash and has nothing to do with the Hungarian one!

About Paprika in the Hungarian Cuisine:

What truly defines Hungarian Cuisine is the skillful use of seasoning. Any Hungarian kitchen will contain a wide variety of spices.

Cinnamon, dill, poppy seeds, and caraway seeds are frequently used. But the Hungarian national spice is, of course, paprika.

Paprika is made from dried peppers and it is what makes Hungarian cooking totally unlike any other cuisine. Paprika adds flavor and color to a wide variety of Hungarian dishes.

It is available in three strengths: sweet (affiliate link), semisweet, and hot (affiliate link).  If you are familiar with Hungarian paprika, you probably already made up your mind about which strength you like best.

If not, try to experiment with different types of this goulash based on your general taste. If you like the dish to be spicier, use hotter paprika. If you want it milder, then use sweet Hungarian paprika instead.

Goulash outside of Hungary and my version of the recipe:

Over the centuries, the Hungarian goulash recipe was embraced all over Europe, and each country adopted a version that suited its taste.

There are many recipes out there, from the traditional Hungarian rich soup style goulash to goulash stew. Here are a few examples of how other countries make this recipe, especially the ones from Central Europe and Eastern Europe:

Austria– Vienna used to be the center of the Austro-Hungarian empire. Therefore, a special type of goulash was developed. Their recipe has no tomatoes, and no other vegetables besides onions are added to the dish.

The sauce is made with red wine, and depending on the region of Germany, the dish is served with potatoes, rice, dumplings, or egg noodles, like spaetzle.

Romania(Transylvania)– This is my version of the goulash you will see described in this article.

Transylvania was, for a long time, part of the Austro-Hungarian empire, and the cuisine was heavily influenced by the Hungarian, German and Austrian cuisines.

Goulash, also known as “gulaș” in Romanian, is a traditional dish in Transylvania that has its origins in Hungarian cuisine. It is a hearty stew made with chunks of beef or pork, onions, peppers, and a variety of spices such as paprika, and caraway.

The meat is tipically slow-cooked in a pot until it is tender and infused with the flavors of the spices and vegetables.

Transylvania’s Hungarian goulash uses beef or pork and has no carrots, potatoes, or noodles. It is also a stew, not a soup. The vegetables or pasta are served as a side dish.

The dish is served with polenta, bread or dumplings and can be accompanied by a variety of sides such as sauerkraut, pickled vegetables, or sour cream. It is a popular dish in Transylvania and can be found in many traditional restaurants and homes throughout the region.

A true Hungarian goulash should be something between soup and stew, more like a rich soup and never thickened with flour.

As my recipe comes from Transylvania, this goulash is more like a stew than a soup. I want to make sure that you don’t jump to tell me that this is not the real deal. I heard that before.

Serbia– their goulash version is almost the same as the Transylvanian one, more a stew than a soup.

Pork is a very popular meat choice, and the ratio between meat and onions is about 50-50%.

More spices are added, like chili pepper and cinnamon. Sometimes the tomato sauce is sweetened with sugar or even dark chocolate added at the very end.

There are also vegetables involved, like bell peppers, tomatoes, and even mushrooms. Bacon also is added for extra flavor, and the dish is served most often over mashed potatoes or pasta.

As you can see, everybody makes it differently, so the best way to go is to choose one version that makes more sense to you and go for it. No matter what you choose, the dish is delicious and worth it.

What kind of meat will you need to make Hungarian Goulash:

Beef shank- which is a cut of beef taken from the lower leg of the animal. This muscle is very used by the animal, and it has a lot of connective tissue.

This connective tissue is broken down through slow cooking over low heat and results in moist, tender meat with rich flavor.

Chuck roast- also has a lot of flavors. While not as tender as other beef cuts and can become rather tough if not cooked properly, this cut is perfect to be stewed, slow-cooked or braised to make it more tender.

Pork– If you choose to use pork instead, then any kind of pork meat is fine. I personally prefer the shoulder part because it has more connective tissue, therefore more flavorful.

However, I always look for cheaper parts of pork when I shop, so whatever is on sale and you can afford, go for it. I would stay away from very lean meat because it doesn’t have much flavor.

How to make the Hungarian Goulash:

The cooking process is very easy and the dish uses simple ingredients.

Chop the meat into 1-2 inches pieces. (Note: In the Hungarian goulash, the meat chunks are usually smaller compared to other meat stews. )

In a large pot (like a Dutch oven)(affiliate link), add vegetable/olive oil or pork lard (the traditional way) and heat it on high heat. Add the meat and brown it all over.

Chop the onions and add them to the meat, together with garlic and peppers.

As we live in the US, I had to use bell peppers. I like red and yellow and stayed away from the green peppers, as the textures and flavors are very different from the Hungarian peppers.

Add the Hungarian paprika (lots of it), the ground caraway, bay leaves, and salt.

Add the chopped tomatoes (or the tomato paste) and the beef broth (or just water).

Cover the pot and let the stew simmer on lower heat for 2 hours or until the meat is tender, stirring once in a while and tasting for seasoning.

Can I make this recipe in the crock pot:

Of course! Follow the same recipe, but start by browning the meat in a pan, sauté the onion, garlic, and peppers, then transfer everything to the crockpot, add the rest of the ingredients, cover, and cook for 4 hours on “High” or 6 hours on “Low.”

Can I make this recipe using an Instant Pot:

Yes! See the instructions below or follow the instructions on your Instant Pot (affiliate link). For tender and juicy meat, I recommend cooking it for about 20 minutes per pound(you have 3 pounds of meat in this recipe) of high pressure (the manual setting), plus 15 minutes of natural release.

Can I freeze the Hungarian goulash:

Yes, you can absolutely freeze it!

Transfer the stew to a freezer bag and freeze it for up to 3 months. You can also transfer it into a single serving portion and freeze it.

It is best to defrost it overnight in the refrigerator before serving. Heat in microwave or stovetop for a few minutes and stir occasionally.

How to serve this Goulash:

Serve it with a dollop of sour cream on top for more authenticity, and invite your friends to a bowl of this amazing dish!

As a side dish, serve mashed, boiled, or roasted potatoes, pasta, or just some delicious artisanal bread or baguette to dip into the sauce.

A glass of your favorite wine would go perfectly with this dish! White wine is better for this traditional goulash from Transylvania that I hope will make your family happy.

Some other recipes to try:

Easy Meals To Make When You Are Stuck At Home

How to make homemade bone broth 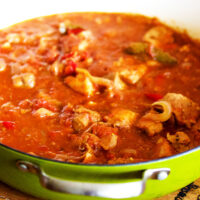 Prevent your screen from going dark

HOW TO MAKE THIS RECIPE ON THE STOVE:

HOW TO MAKE THIS RECIPE IN AN INSTANT POT:

HOW TO MAKE THIS RECIPE IN THE CROCK POT:

My mother, German born and raised, made her version of Goulash as described above with the following changes: the meat that was used was beef, pork and veal, all cubes. Also, no peppers were used in it. That might have been due to my father's tastes, he also was born and raised in Germany. He liked almost any kind of meat, fried potatoes, wurst, etc and would eat spaghetti and meat balls as long as his was served to him with brown gravy, not tomato sauce. Once the goulash was finished, it was eaten over noodles.

This was wonderfully tasty! My husband loved it so much, we are making it again 1 week after. We usually repeat once a month if that often🙂 This time we used parsnips instead of potatoes (husbands request) I do the whole thing in my slow cooker. It has many cooking choices which I also love.