130shares
Authentic Mexican Chicken Fajitas-Fajitas De Pollo is a popular dish served in Mexico for casual entertaining. One of the easiest dishes of the Mexican cuisine, fajitas are usually made with chicken, beef or shrimp. 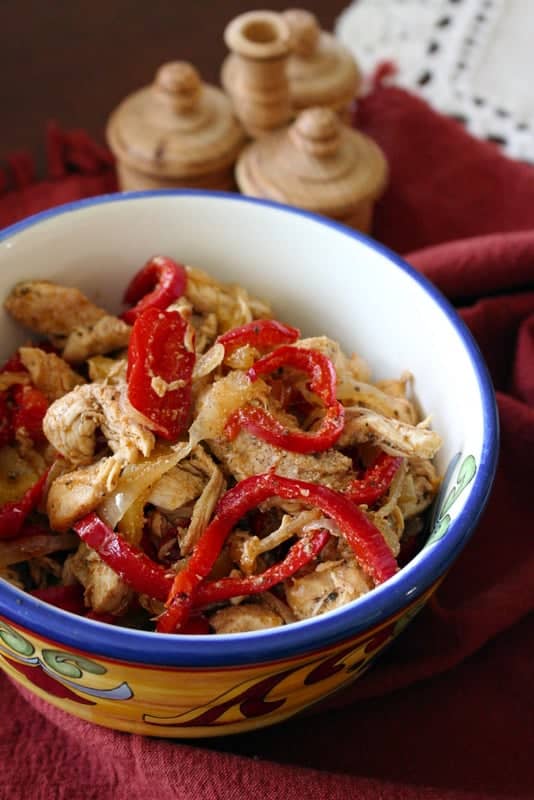 Today we are going to prepare a delicious authentic Mexican chicken fajitas, or fajitas de pollo. One of the easiest dishes of the Mexican cuisine are the fajitas that are usually made with chicken, beef or shrimp.

If you are looking for a low carb meal, you can skip the tortillas and wrap the fajitas in a lettuce leaf, or just eat them like that.

In Mexico, this dish is popular for casual entertaining. The recipe is easy to make and the flavors are divine! Perfect meal for a weeknight dinner.

It also tastes better if you marinade the meat for at least 30 minutes before cooking it.

I used chicken breast but it is also your personal preference and what you have available. Chicken thighs are great too.

How to make the authentic Mexican chicken fajitas- or Fajitas de Pollo:

I sliced the chicken breast into 3/4 inch wide(about 2 cm)strips and placed them into a large bowl.

Note: Some recipes tell you to cook the chicken without slicing it in strips, but in order to marinate it properly, in my opinion, it needs to be sliced. It will not get dry if you don’t overcook it.

I added the lime zest and juice, granulated sugar, oregano, cayenne pepper and cinnamon. This are my secret ingredients for this authentic fajitas recipe.

I do not recommend buying the seasoning in a packet for this dish. There is no reason for that. 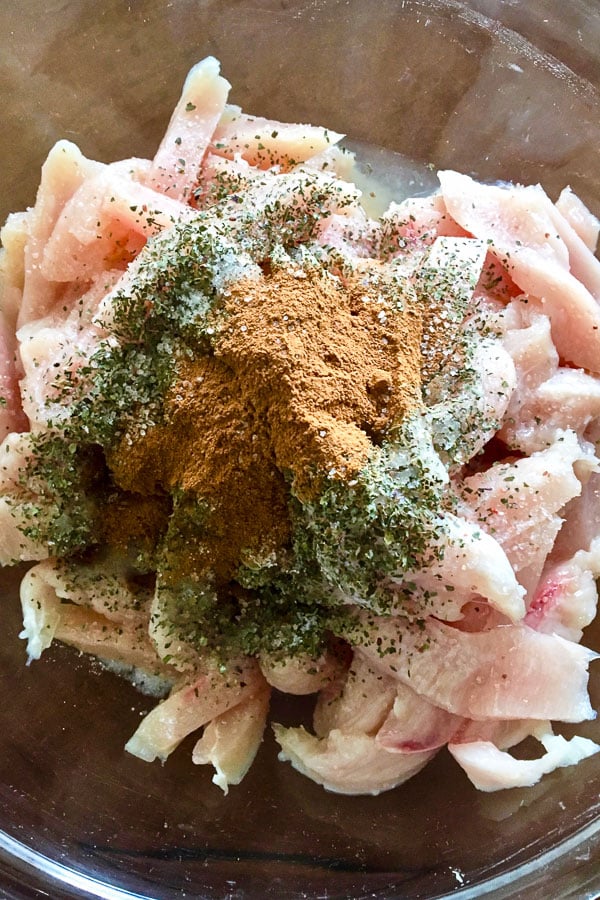 I mixed throughly and set aside to marinate for at least 30 minutes.

Meanwhile, I prepared the peppers. I used red, yellow and green peppers. I love the red and the yellow, in particular but feel free to use whatever peppers you have available. You can also add jalapeno peppers if you like a little bit of heat. 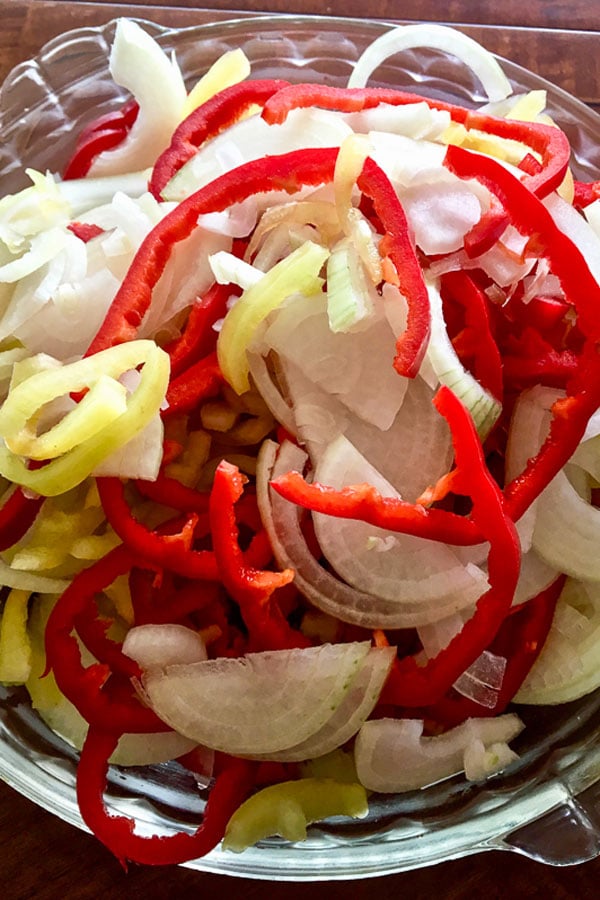 Do I use a cast iron pan or a regular one?

A cast iron pan is my preference for searing the meat in a better way. Just make sure the cast iron pan you use is seasoned well, so the meat doesn’t stick to the pan.

However, if you don’t own a cast iron pan(which you should), a nonstick pan is good as well.

No matter what you use, make sure the pan is hot before you add the chicken.

At the time of taking pictures, I used a regular nonstick pan which I heated up with a little bit of oil. I stir fried the marinated chicken for 5-6 minutes. 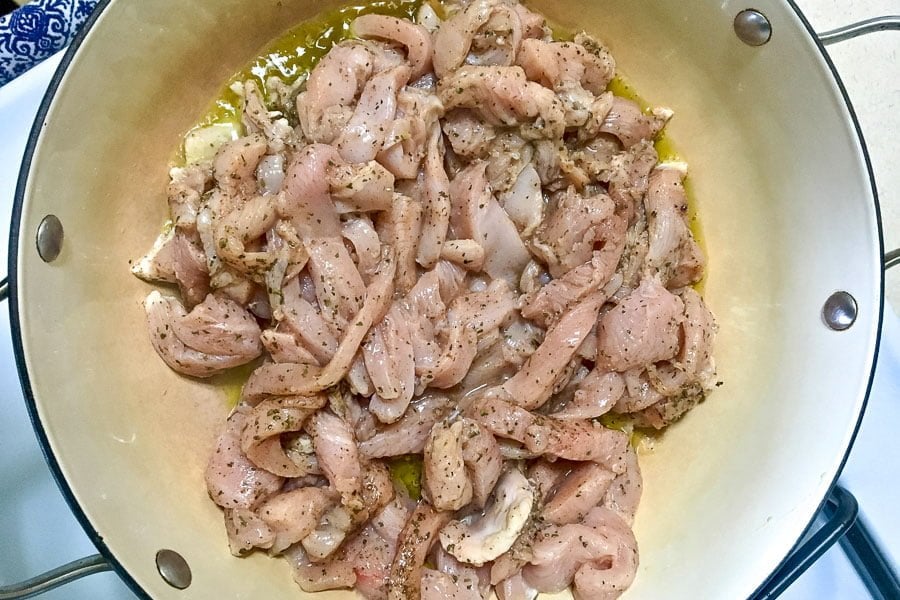 I added the peppers and onions and cooked for 3-4 minutes more. 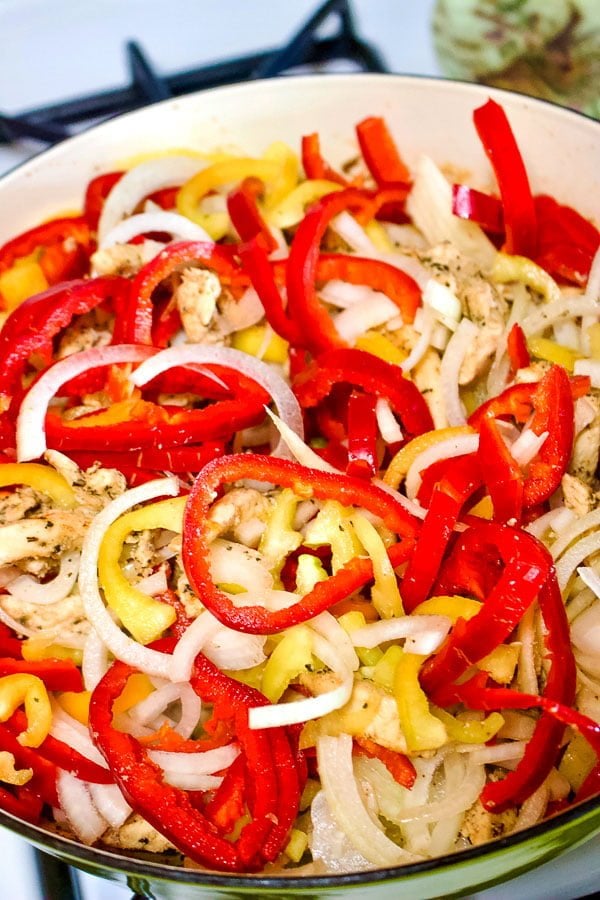 The chicken strips should be cooked through and the vegetables soft and tender, but still juicy. 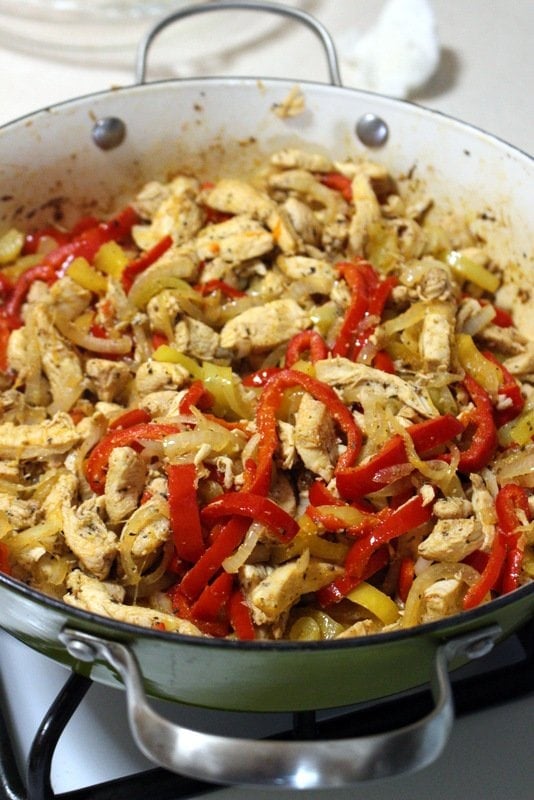 Voila, super easy to make and in just over 30 minutes you have a delicious meal on the table.

Spoon the chicken mixture into a serving bowl and take it to the table.

Serve the fajitas with:

If you do not have access to Mexican crema,  use sour cream or French creme fraiche.

Each guest takes a warm tortilla, spreads it with a little salsa, adds a spoonful of guacamole and piles some of the chicken mixture in the centre. The final touch is to add a small dollop of sour cream/crema.

The tortilla is then folded over the filling and eaten.

PIN THIS FOR LATER: 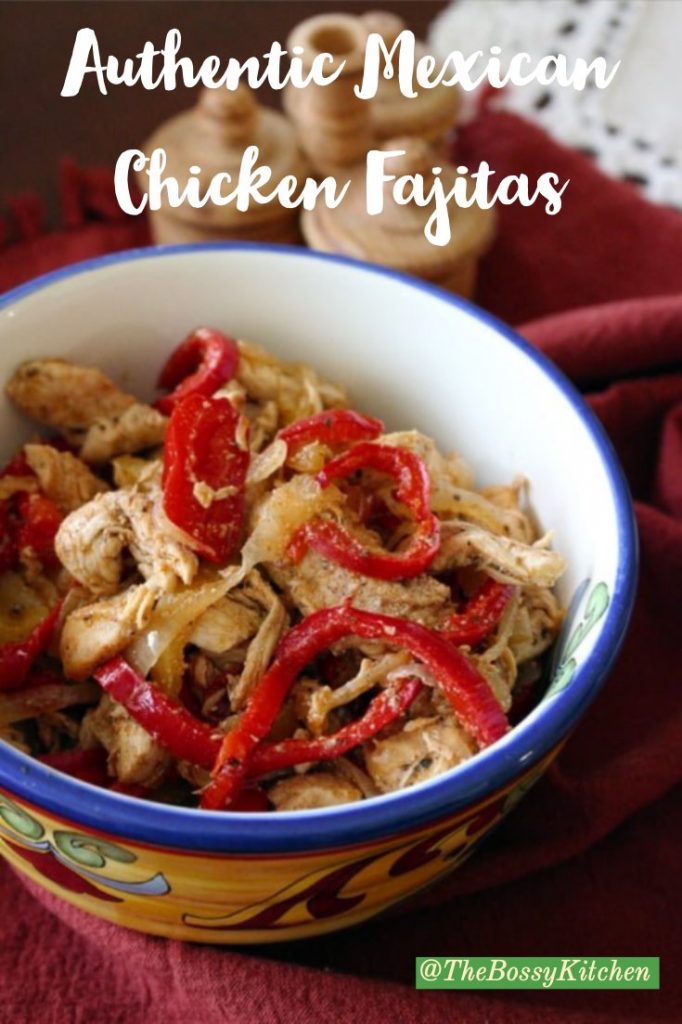 Can I freeze the fajitas for later use?

Yes, you can freeze leftovers. You can also marinade the meat in a bag and freeze it for later use. When ready to cook, defrost the meat and continue with the recipe.

Or maybe you want to join The Bossy Kitchen community group where you can share your creations made from this blog or your favorite recipes! 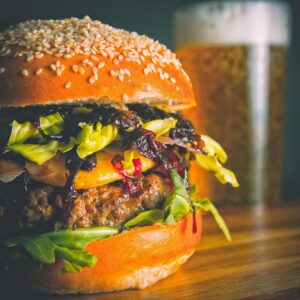 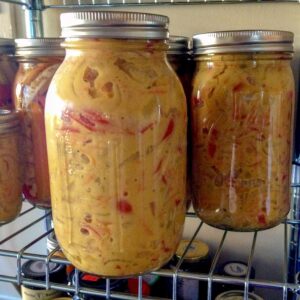 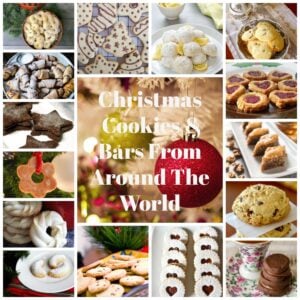 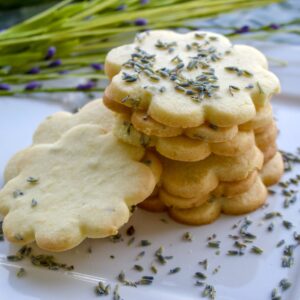 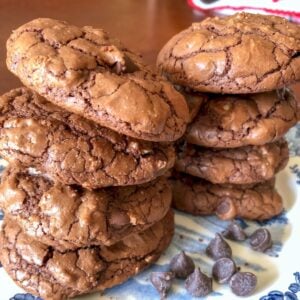